My latest food obsession is with cinnamon. I can’t get enough of it. This ancient spice keeps finding ways into my cooking. I love it because it sweetens any thing it touches, not with a sugary sweetness, but with a spicy sweetness. Recently, i found out cinnamon is good for digestion. So, last week, when nearing the end of my home made muesli, I vowed to make a cinnamon inspired version, and here it is.

Once you’ve made your own muesli you’ll never return to the boring supermarket varieties. This toasted muesli recipe using another favourite ingredient of mine – pure maple syrup.  It’s a little expensive, but is a great sweetening alternative to highly processed sugar. It must be 100% pure maple syrup, not an imitation.

So a small amount of butter, a large pinch of cinnamon and a few glugs of 100% maple syrup make up the special rub to coat the rolled oats. Then it’s lots of nuts. The nuts can be substituted with any of your favourites. My choices are macadamia, pecan and almond, and if I’d remembered, I would of also included hazelnuts. Add some seeds – I’ve used pepitas and sunflower, rub it all together  and toast it in the oven for 10-12 minutes.

My final flourish, when the muesli has cooled, is adding some chopped fresh medjool dates. I think of them as fat, caramel sweets, they work perfectly with the cinnamon and the maple syrup. If you really want to set the bar high, try it with caramalised banana, and as with all muesli, finish with a dollop of yoghurt. 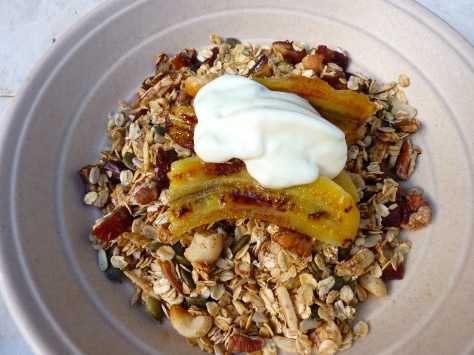 A word of warning – this muesli is highly addictive.

Pre heat oven to 190C or 170C fan forced. Lightly crush the macadamia and pecan nuts. Place them in a large bowl with the almonds, pepitas, sunflower seeds and rolled oats.

Place butter and cinnamon in a small pan, heat till butter melts, then stir through the maple syrup. Pour cinnamon mix over oats and nuts and rub between your hands till all the oats are coated and the cinnamon mix is evenly distributed.

Line three large trays with baking paper. Spread the muesli over the trays and bake in the oven for 10-12 minutes, stirring once half way through baking. Allow to cool. Place toasted muesli in a large bowl.

Halve medjool dates and remove pip. Cut into a small dice. Toss dates through cooled toasted muesli. Store muesli in an air tight container for up to two months.

Food inspiration from my kitchen to yours.